Originally from Lyon, France, Marie-Ange Colbert is a timid young woman with the potential for great power. Possessing a unique blend of mutant and mystical abilities, she hopes to better understand why she can do what she does as a member the Xavier School. Only time will tell what's in the cards for her future, but chances are, Tarot already knows.

Timeline:
* 2002: Born in Lyons, France to wealthy parents with little time for a daughter
* 2004: Taken in by her grandmother, began learning the basics of mysticism
* 2009: At a rare family gathering, ended up excitedly recounting one of her grandmother's stories to her mortified parents
* 2009: Taken from her grandmother's care and sent to a private boarding school in France
* 2011: Recieved her first deck of tarot cards, continued her studies in secret
* 2016: Had first successful prophecy, predicting a natural disaster three days before it occured. Was believed by none
* November 2019: First manifestation of her mutant powers, as she inadvertantly summoned forth the Empress while doing a reading for a schoolmate
* December 2019: Approached by representatives of Xavier's School for Gifted Youngsters, offered education and training in her abilities; she foresaw herself accepting, and did so
* 2020: Bid goodbye to relatives to start a new adventure in America

Devoted:
Marie's devotion lies in two areas. She believes herself to be the recipient of a great gift in being able to use the tarot to divine the future, and will typically react favorably to anyone who requests a reading. Likewise, she'll do her best to ensure that the outcomes predicted by the cards come true, believing that the future is not something which can be changed.

Follower:
Marie, without a doubt, is a follower. Whether it's following the guidance of the tarot cards, or following someone else's instructions, she's not the type who's likely to act of her own accord without being pushed in that direction.

Introverted:
Having been bullied by the majority of people in her life, Marie's natural inclination is to avoid interacting with people that she doesn't know. While she can be dragged along into social settings and cornered, she's not likely to be the first to approach a stranger, though can be more talkative with those who've proven themselves safe.

Optimistic:
Despite all of the negatives she's faced growing up, Marie is the type of girl who still tries to keep a positive outlook on life, operating under the belief that, no matter how bad it gets, better times might be a single turn of the cards away.

Image Animation:
Marie is capable of bringing the images shown on her tarot cards to 'life'. These creatures can vary in size, from being the size of an average human to around a twenty-five foot tall creature capable of carrying her and several others, and those depicted to have wings can fly, as well. The creatures are not invulnerable, and can be dispersed by attacks that would be strong enough to break a human's bones, as well as by abilities or equipment specifically able to disrupt magic. Presently, she only can conjure up to one smaller creature without difficulty, or one large creature with total focus before being overwhelmed and passing out.

Flight: The creatures created by the Lover, Temperance, Devil, and Judgement cards are capable of flight at approximately 50MPH, and of carrying Marie and others.

Mobility: The contraption summoned by the Chariot card seats Marie alone behind a created driver, and travels at a maximum of 25MPH.

Light Generation: The Sun, Moon, Star and World cards are capable of producing light, and a blinding light in the case of the Sun.

Other notes: The four light-generating summons along with the Wheel of Fortune are capable of hovering in mid-air, whereas the 'Ace' cards of the Minor Arcana also hover as essentially disembodied hands, but are capable of movement comparable to a hand attached to an arm. All cards in her deck carry weapons of some sort with the exception of the Lovers, Strength, Wheel of Fortune, Tower and the aforementioned light-giving cards.

Precognition:
Be it skill, ability, or some mixture of the two, as her grandmother could before her Marie is capable of using her tarot cards in order to catch glimpses of possible futures; and while she does have true ability in this manner, she treats every insight offered by the cards as the gospel truth. While she's able get an idea of how a person might impact her own life remotely, in order to view events that would affect them alone she needs her target to shuffle and cut the cards prior to a reading.

Resurrection:
Marie is bound to the mystical forces of fate. Simply put, while she can die, her soul remains in a sort of stasis until fate requires her presence again, at which point she will be recreated as she was before she died, in whatever place is deemed necessary, as she is deemed necessary. Marie has no knowledge that this is the case as it has never occured to her, and has no control over this more magical aspect of her abilities, either.

Dance:
One of the more entertaining things that she learned at the boarding school she was largely raised in was the art of ballroom dancing. She can waltz, foxtrot, tango and more with the practiced ease of a socialite.

Etiquette:
Another skill picked up at her boarding school was etiquette. Marie is equipped with knowledge ranging from what fork is used for what meal to how to properly greet visting dignataries.

Linguistics:
Marie is a native French speaker, with good but imperfect English skills.

Occult Knowledge:
Marie was raised at first by her grandmother, a woman with mystical talents of her own, and while said woman had meant to teach her more than simply the way to read the tarot, Marie was taken from her at too young an age for this to happen. The cards were not, and instructions she was able to keep hidden aided her in learning their traditional usage.

Religion:
The teachers at her boarding school were... less than fond of Marie's occult interests and tried to overwrite this by converting her to Catholicism; while she has little interest in it, she was forced to learn and is perhaps surprisingly well educated on the subject.

Violin:
Another skill picked up in boarding school, Marie is knowledgable when it comes to playing the violin. While not a virtuoso by any means, she won't make anyone's ears bleed when attempting to play, either.

Tarot Cards:
While not the true source of her powers, as she would be capable of using any deck of tarot cards with the same ability, she does have the deck of tarot cards which were given to her by her grandmother. These act as the focii for her powers and can be assumed in her possession at all times unless otherwise noted.

Xavier's School:
Marie's a student at Xavier's, and there are people there who know she exist and care for her wellbeing, as well as resources that she has access to while enrolled there, from food and shelter to anything else the staff sees fit.

Age:
Marie's 18 years old. This can lead to older folks not taking her ideas seriously, along with reduced rights such as the inability to purchase alcohol.

Dependent:
As much as the creatures she summons are bound to her will, Marie is bound to the will of the cards; while she may be able only to see a possible future, she accepts what she reads as fact; not something that can be changed in any way, but a wave to be ridden to its crest. Even moreso, if someone was able to manipulate her cards in any fashion, they'd have a method as effective as any mind control. In addition, her cards are used to make every decision; should she ever be seperated from them for an extended period of time? A mental breakdown would likely follow.

Eclectic:
Marie, polite as she is, is firm in her belief in the cards and will defend them forcefully without regard for how it might make her look. In the wrong company, someone who claims to be able to see the future could be thought of as weird, or even worse. These are things that she just doesn't consider.

Foreigner:
Marie isn't a natural-born citizen of the US. While her means of arrival and stay - a student visa - are entirely legal, that doesn't mean that those with prejudice against foreigners will treat her well, and with her accent? There's just no hiding it without keeping silent.

Naive:
Being raised largely in a controlled environment, Marie's not the wisest in the ways of the world, and and not used to anything resembling independence. She's prone to keep her guard down and is far from difficult to fool if someone really tries.

Timid:
When she was sent away by her parents, Marie retreated into a shell. When the teachers would punish her for not believing as they did? She felt less than human. The result is a rather meek individual who can be pushed around by anybody in most cases, the rare exception being when her core beliefs (such as her faith in the tarot) are challenged. 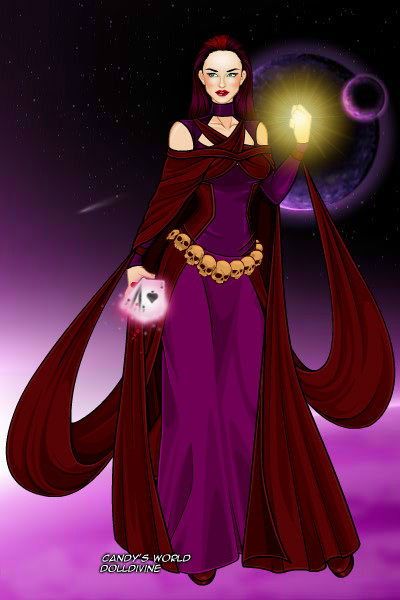